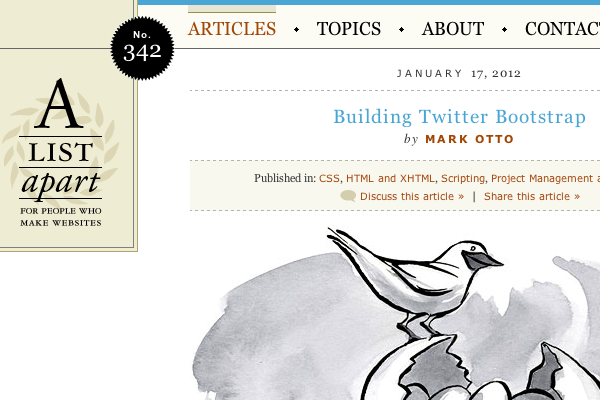 Not too long ago I was asked by the A List Apart crew to contribute an article on Bootstrap. After some delays due to the Twitter redesign, the holidays, and some run-ins with the flu, I’m very happy to announce that the article has been published in today’s new edition.

The article, Building Twitter Bootstrap, focuses on the decisions and processes that went into creating Bootstrap. In short, a super small group of developers and I got together to design and build a new internal tool and saw an opportunity to do something more. Through that process, we saw ourselves build something much more substantial than another internal tool. Months later, we ended up with an early version of Bootstrap as a way to document and share common design patterns and assets within the company.

After a year of working on it on nights and weekends, we open-sourced Bootstrap in late August 2010. It’s since become the most popular project on GitHub with over 14,000 watchers and 2,400 forks. There’s a lot more in store for Bootstrap, including v2 launching in the coming weeks, and I couldn’t be more excited about the coming months at Twitter.

Also, a special thanks to Mandy Brown and Krista Stevens as editors for the article. Without Mandy’s incredible ideas and insightfulness, and Krista’s editing and article preparation, the article wouldn’t have happened. It’s been a pleasure working with both and I hope to do so again in the future.

Head on over to A List Apart and give it a read.