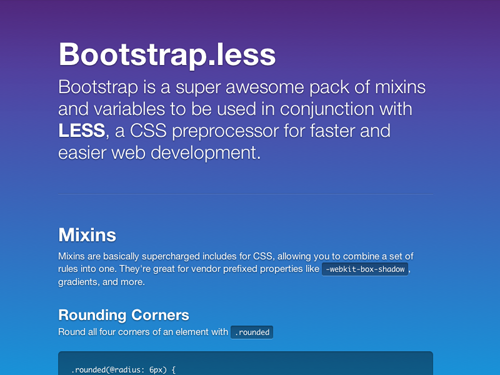 For the last several months, I’ve been developing websites and apps with an awesome tool called LESS. It’s a CSS preprocessor that sits on top of regular ol’ CSS, but provides a ton of extra features like mixins, variables, functions, and operations. The best part? It all comes out as compressed, locally-stored CSS. Hotness, right?

Well, when I started using LESS at Twitter to create Blueprint—a CSS and HTML framework that helps our engineers quickly developer Twittery apps—I realized I needed a starter file of sorts to house all my variables and simple mixins. As time went out, that file grew and has since become the soul of every project I work on, including this very website.

Today, I’m releasing a modified version of that file and it’s called Bootstrap. Bootstrap is a super awesome pack of mixins and variables to be used in conjunction with LESS in any of your web projects. It immediately makes any new design or development project that much easier to start, and also makes older projects easier to maintain.

Looking ahead, I plan on adding more to Bootstrap with additional mixins, variables, and such. I’m also considering making Bootstrap part of several larger projects that I hope to release over the next few months. More on those things to come soon enough!

For now, visit the Bootstrap website to find out more. You can download or fork it at GitHub. Questions, comments, or suggestions? Email me.